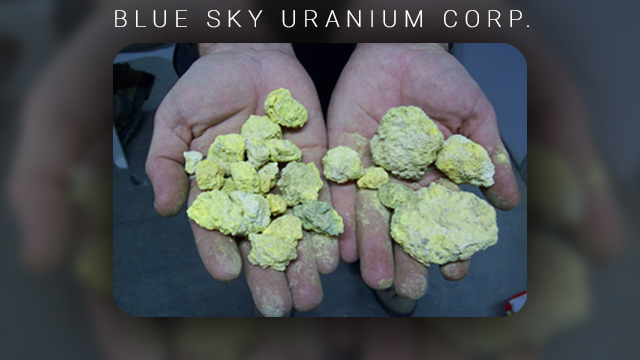 We all want Cleaner and Greener!

We all want Cleaner and Greener!

There has been a major shift in energy happening. The world wants greener and cleaner, and companies focused on providing climate-friendly solutions are setting themselves up for large potential gains. I think we can all agree that this shift is well under way.

Emerging carbon policies are providing economic incentives for low-carbon sourcing of raw materials while manufacturers, consumers, and investors are demanding a larger say in how materials are recovered. Even BlackRock, an almost 10 trillion-dollar fund, states: the next 1000-billion-dollar start-ups will be in climate tech.

Make no mistake, nuclear power is in this sector.

There’s no doubt that the gas crunch we see in Europe and the US is part of a wider challenge that will spread around the globe. Unfortunately, there’s still a massive spike in coal-fired power but there is a better way – solutions are already in place and Argentina in particular is set up for success.

One solution is nuclear and it requires uranium.

Nuclear is the second largest source of low-carbon power in the world. Regardless of any preconceived notions you may have, nuclear is by far the safest and cleanest energy source we have available. We tend to associate it with Fukushima and Chernobyl or even atomic bombs and weaponry, but we need to embrace the nuclear age and its positive abilities. The technology has leapt forward at an incredible pace. There are currently 443 operational nuclear reactors in 33 countries around the globe that generate 10% of the world’s electricity. 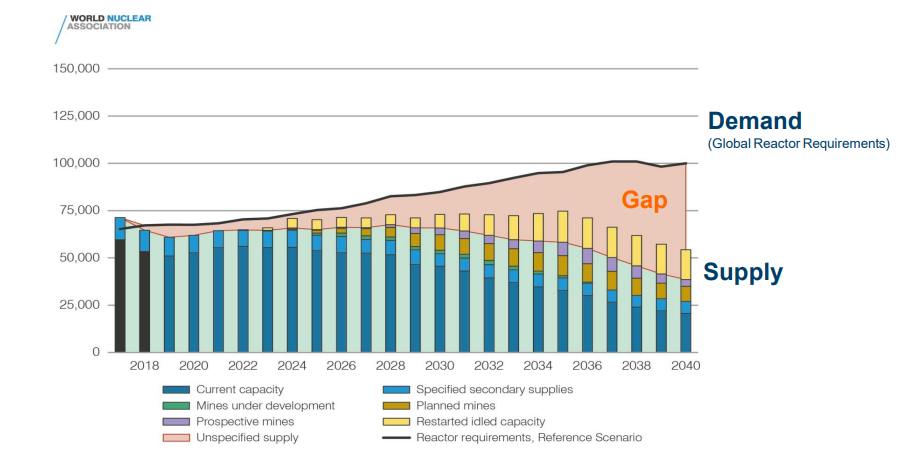 The planned and under construction reactors will bring the total number of existing reactors to 597, a 35% increase from current levels. (Cameco)

We’ve seen a significant upward trend in uranium over the past year. 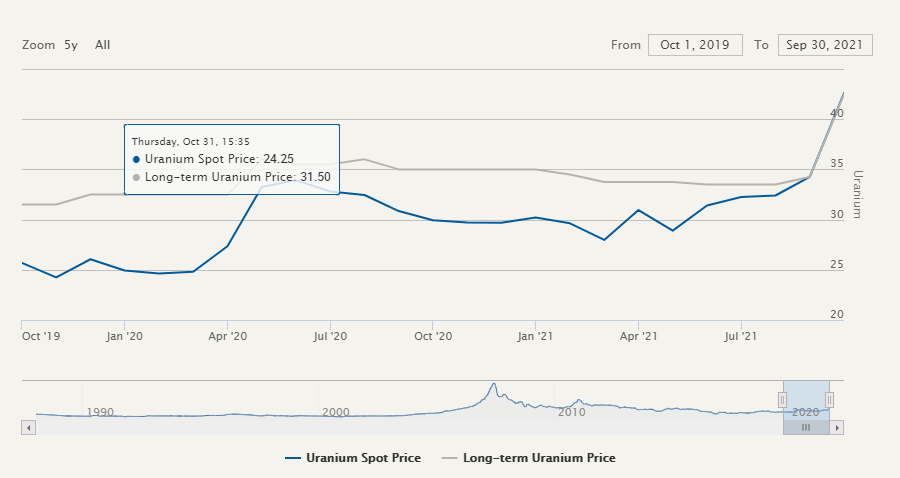 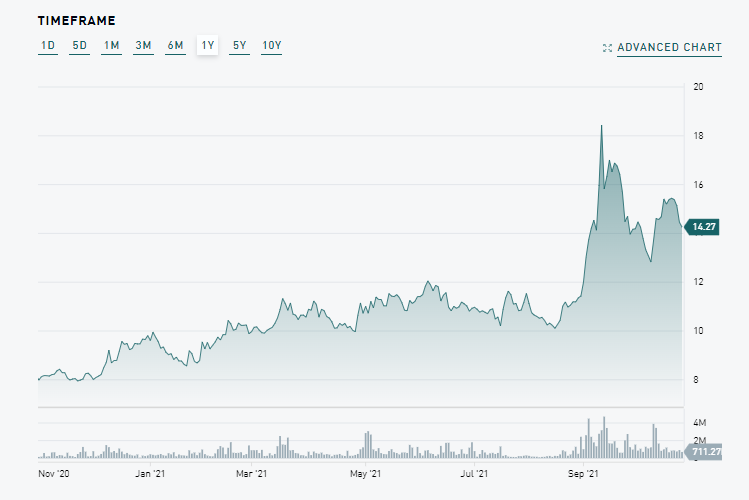 But no producer until now?

Get in ahead of the curve

The company has drilled 9,000 meters over its three deposits: the Santa Barbera, Rio Negra Basin, and Anit Deposit. Amarillo Grande could become the largest and lowest-cost uranium mines, including among those in Kazakhstan which produce 40% to 60% of global supply each year. In fact, the geology is very similar to the world’s largest and lowest-cost primary uranium-producing zones, the Chu-Sarysu and Syrdarya Basins in Kazakhstan. When we look at Cameco and some other explorers and producers in the Athabasca in Northern Canada, these companies must extend down 1km to source the uranium.

Blue Sky Uranium is at surface and expanding. 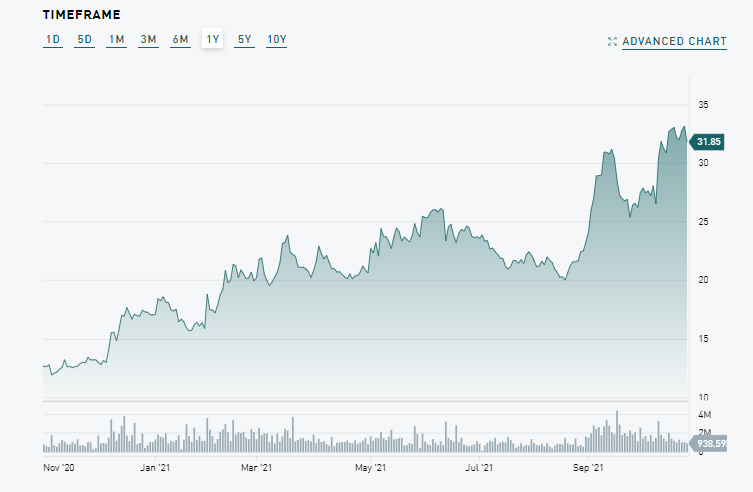 Blue Sky controls 100% of this district-scale land package which covers over 261,000 hectares of mineral

rights. The area is semi-desert, with a small population and low environmental risk. Geologically, the district-scale project contains sandstone-hosted, oxidized and partially oxidized uranium deposits at or very near surface in loosely consolidated sand and gravel.

So far, Blue Sky’s resource at Amarillo Grande is concentrated in the Ivana deposit at the far south end of the project area as shown below. 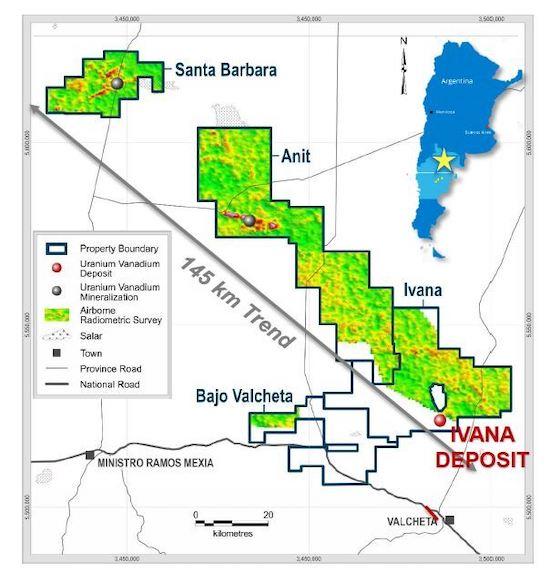 Based on 488 drill holes, independent engineers and consultants estimated the resource at Ivana in 2019 to be:

The deposit’s NPV, discounted at 8%, is estimated to be $135.2 million with an internal rate of return of 29.3%, paying back in 2.4 years. Capital expenditure would be $128 million, including $28 million of contingency costs.

Few uranium operations around the world could be profitable at today’s uranium price of approximately $28/lb., but Amarillo Grande just might be.

But that’s besides the point. The plan calls for a far larger and still lower-cost operation.

Subscribers sign up in between with an offer link to video

Let’s do a quick recap before diving deeper. The company has a natural buyer who is mining-friendly, nuclear capable, and technically competent. This equates to a country that can both source and supply uranium! The project has a PEA in place along with an outstanding technical and management team.

The macro outlook for energy is HUGE, the opportunity early, and the possibilities endless. When uranium surges, it surges fast and is the answer to the world’s greener, cleaner energy needs.

The Grosso Group offers a huge advantage because they’ve built a reputation in Argentina – 25 years worth of goodwill, great work, value, and strong relationships.

Blue Sky Uranium has a PEA on one of the deposits.

No domestic uranium for fuel production: 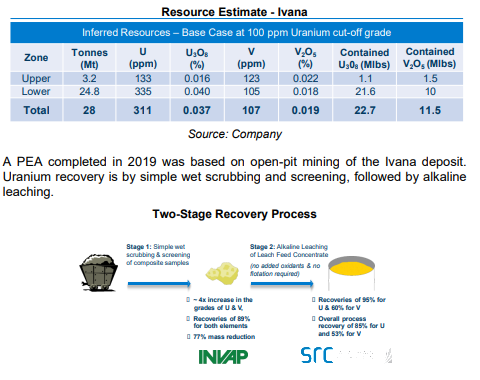 The Grosso Group and Team

The Grosso Group is a private management company founded in 1993 with a focus on South America. The intention and mandate of the company is to create value for investors through the growth of the publicly listed member companies. Founder Joseph Grosso was named Argentina’s Mining Man of the Year in 2005. They’ve discovered three multimillion precious metal deposits, and have entered partnerships with majors like Barrick Gold, Viceroy/Yamana, Teck Cominco, Rio Tinto and Areva.

This group is the cornerstone of providing resources to outstanding management teams taking advantage of the global shift in energy. 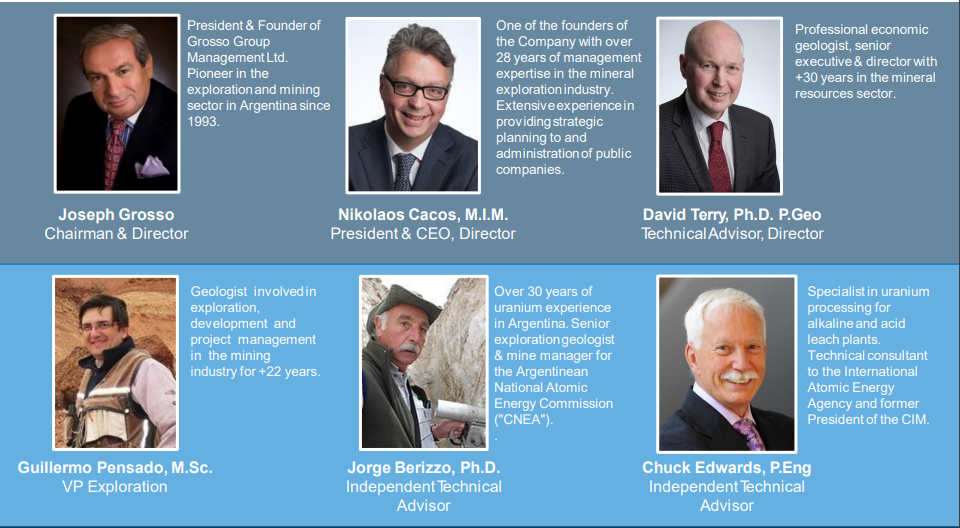