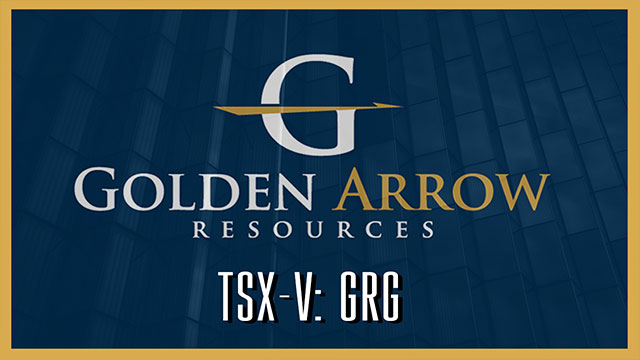 Credited with pioneering the mineral exploration industry in Argentina, the Grosso Group’s track record includes four exceptional mineral deposit discoveries, and the company is known for fostering strong relationships with communities and governments in every region where it operates.

I’m particularly excited about the Grosso Group’s Golden Arrow Resources – a Vancouver-based junior explorer that’s advancing precious and base metal discoveries into highly valued deposits across South America. Why do I have my eye on Golden Arrow? There are a few reasons.

With zero debt and $17.5 million in cash and equivalents, the company is actively exploring a large, diversified portfolio that spans the value stages, with early-stage projects providing blue-sky discovery potential, and projects in established mining districts targeting near-term resources.

These include a district-scale frontier gold opportunity in Paraguay, and a highly prospective base metal endeavour in the heart of Chile’s leading mining district for which the company recently kicked off an inaugural drill program.

Golden Arrow also has a major stake in metals-rich Argentina with more than 180,000 hectares of high-quality mineral projects at all stages of development, positioning the company to define and develop exceptional new deposits.

In addition to selectively operating in regions that show incredible geologic potential, the company is led by a remarkable management team with an unmatched track record. At the helm is Joseph Grosso who developed the Argentina mining vision back in 1993 and assembled a premier international exploration team to put his vision into action.

Part of the company’s outstanding track record includes advancing it’s Argentina-based Chinchillas Silver project from discovery to development in just five years, and then successfully monetizing the asset through a sale to SSR Mining. Golden Arrow now benefits from a significant equity interest in SSR, providing upside potential and leverage to gold and silver.

At the time of this writing, Golden Arrow has approximately 116 million shares issued and outstanding and 148 million fully diluted. The company recently announced that it received approval from the TSX to purchase up to 10,132,012 of its common shares, which is equal to 10% of the public float as of Aug. 10, 2021.

Golden Arrow just initiated its first ever 3,000 metre phased drill program at the 100% owned Rosales Copper project in Chile. Acquired in July of last year, Rosales comprises 3,444 hectares and is located in the Atacama region, a prolific mining district that hosts multiple large precious and base metal mines. The project is road-accessible and is situated less than 90 kms from the mining centre of Copiapo, with world-class exploration and mining infrastructure readily available.

Targets for the inaugural drill program were defined by the results of a transient electromagnetic geophysical survey that was completed across the property earlier this year. The survey detected two highly conductive anomalies covering 850 x 500 metres and 600 x 400 metres at surface, w

The survey was then followed by three lines of TEM soundings which confirmed a strata-bound or mantos-style copper deposit model, further supported by the mineralization, alteration, and host rocks already identified at Rosales. The soundings also detected a prominent, extensive conductor roughly 500 metres below ground. Golden Arrow’s VP of exploration, Brian McEwen, was quoted as saying:

“This type of high-grade copper deposit is common in Chile, with well-known examples including the El Soldado and Mantos Blanco mines. Plans call for 3,000 metres of phased reverse circulation drilling at Rosales to test the anomalous targets identified via the geophysical survey.” 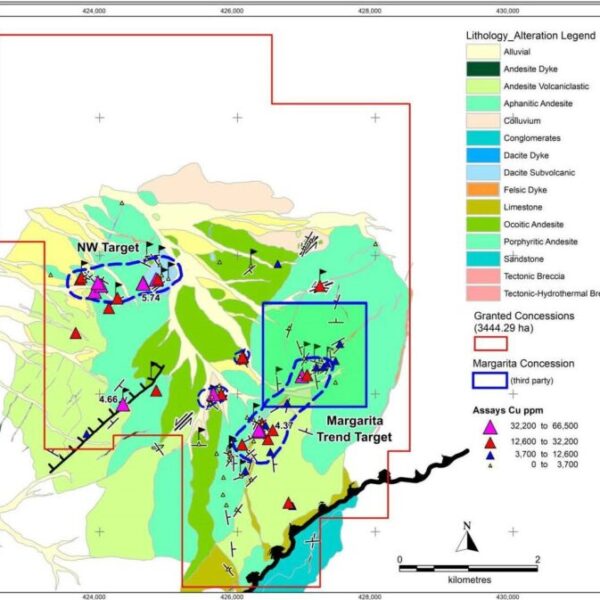 The first phase of drilling will include 1,400 metres across four holes which will test both the upper and lower conductors and confirm the geophysical interpretation. The subsequent 1,600 metres will test the extent of the anomalies as well as additional targets. 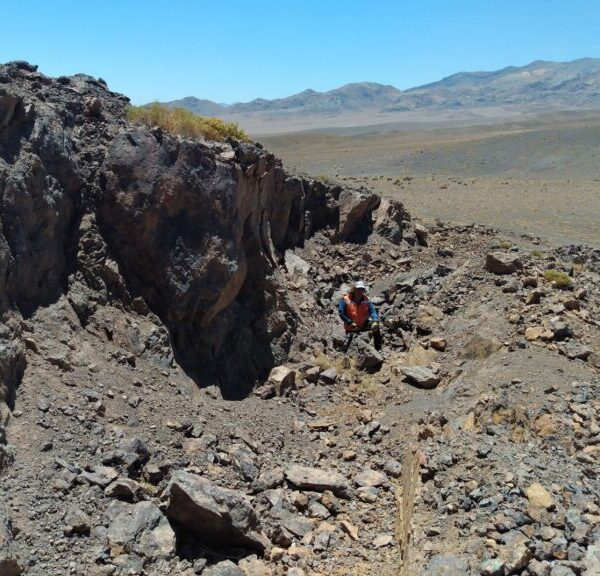 The first phase of the Rosales drill program will include 1,400 metres to test both the upper and lower conductors and confirm the geophysical interpretation. The subsequent 1,600 metres will test the extent of the anomalies and define additional targets.

Golden Arrow also had some exciting drill news to share in Paraguay. The company completed a shallow 550 metre drill campaign across 41 holes in addition to an induced polarization geophysical program at its district-scale, high-grade Tierra Dorada gold project.

Results of the program confirmed the continuity of gold mineralization and veins below surface, with some areas demonstrating broader veins than originally expected, and higher grades than what had been uncovered during surface sampling.

The survey revealed multiple new targets including a 1,700 metre anomalous trend, open northeast and southwest, with the southwest extent connecting to a broad, higher chargeability anomaly. Commenting on the results, Brian McEwen said:

“We drilled 41 holes and hit more than we missed, drilling some very good intersections. By running the IP survey, we were able to identify some really positive trends. All in all, we have a program that’s shaping up really well across a largely underexplored property. We plan to advance as quickly as possible.”

As the Alvaro target shows multiple areas with high-grade gold in quartz veins, including some visible gold, the company will continue to explore the target to delineate new prospects and refine targets for a larger drill program. Golden Arrow has also staked an additional 10,700 hectares to cover the El Cabo (Arenales) target on the Tierra Dorada property. 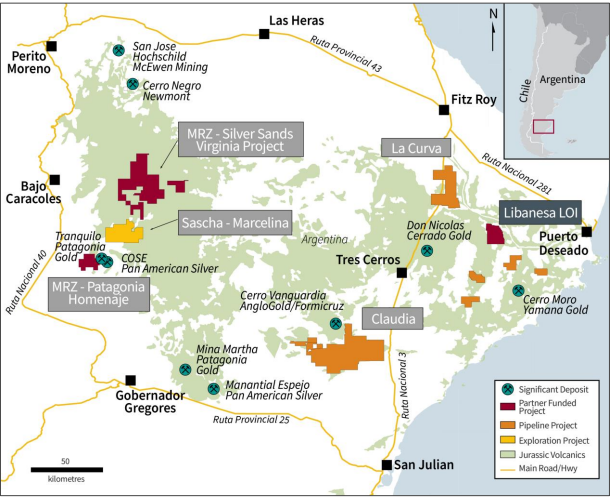 Paraguay is one of the last under-explored jurisdictions in South America. Geological potential points to significant mineralization, but there’s been limited modern exploration. Multiple gold targets have been identified across the Tierra Dorada Gold project.

Golden Arrow holds a large, diverse portfolio in Argentina. The company reported results from a trenching and sampling program across its Flecha de Oro project which revealed significant gold intervals. The epithermal gold project is located in the central Rio Negro province and consists of the Esperanza, Puzzle, and Maquinchao exploration properties, covering 9,968, 1,952 and 2,000 hectares respectively.

Phase 1 of the trenching program at Esperanza focused on a nine square kilometre area where numerous gold-bearing quartz-veins have been identified at surface. Since the start of the trenching program in May of this year, Golden Arrow has completed 20 trenches totaling 1,693 metres across Esperanza. The areas sampled had previously returned high-grade gold in earlier surface sampling programs.

The Esperanza property also revealed similarities in size and geologic style to the Cerro Vanguardia district that’s produced 4.5 million ounces of gold and is now being used as an exploration model.

With no dust collecting under their feet, the company also announced the commencement of an inaugural exploration program at its Yanso Gold project in the San Juan province of Argentina.

Yanso is a gold-copper intrusive-related target with a 300 metre by 90 metre zone of strong alteration that coincides with gold and other geochemical anomalies, open along strike and untested at depth. It benefits from an excellent regional setting that includes nearby producing mines and deposits, and a clearly delineated gold and copper setting. Highlights of previous work conducted across the property include rock chip samples with assays of:

The new program will incorporate a 6.6 line-kilometre induced polarization resistivity survey to better understand the subsurface extent of the mineralized zone based on chargeability. The survey will cover the known target area and test for extensions to the north and south over a distance of 2.4 km.

Golden Arrow will also complete a 700-hectare ground magnetics survey to gather subsurface geological and structural information, and will initiate a surface reconnaissance program of mapping and rock sampling.

To further diversify its stake across Argentina, the company recently signed a letter of intent with Mirasol Resources to option the Libanesa Silver-Gold project, located in Santa Cruz. The deal will provide Golden Arrow with a 75% undivided interest in the property, allowing the company to exercise the option by incurring exploration expenditures and making staged cash payments over six years.

Libanesa is a 14,500 hectare, drill-ready project that is surrounded by producing mines and hosts diversified geological, geochemical, and geophysical supported drill targets. The principal target is Cerro Plomo which is characterized by a mineralized Au/Ag hydrothermal breccia exposed at surface, with geophysical anomalies at depth. Trench results of the target to date include:

Additional targets within Libanesa include peripheral polymetallic veins at the main prospect, and the Lagunita prospect which has reported rock chip values up to 7.2 g/t gold.

In light of recent strengths within the copper market, Golden Arrow entered a definitive agreement to option its 12,000 hectare Caballos Copper-Gold project to Hanaq Argentina S.A., in which Hanaq will have the opportunity to earn a 70% interest by spending U.S.$4 million on exploration over six years.

This will allow Golden Arrow to build value at the property while concentrating their efforts on core precious metal projects across Argentina, Paraguay, and Chile.

The company’s Argentina-based copper portfolio also includes Mogote and Don Bosco, which are situated in geologic districts that host world-class copper and gold deposits, and are available for joint venture.

Looking forward, Golden Arrow will continue its project acquisition efforts by constantly reviewing new opportunities to add to its exploration pipeline. The company will be releasing further results from their many exploration activities soon. Stay tuned to goldenarrowresources.com.