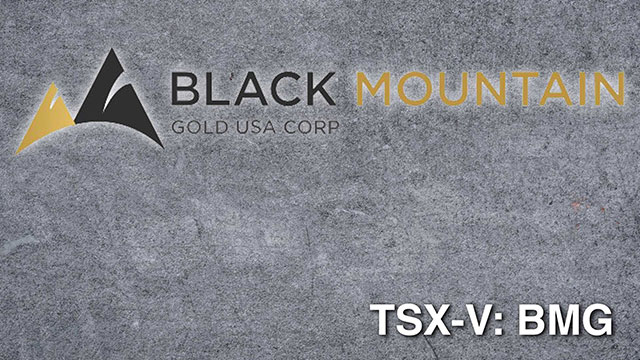 Throughout last year’s mid-March crash, gold continued to perform strongly, outpacing all major U.S. stock indexes, the real estate market, the U.S. dollar, and even Treasuries. In the month of May 2020, gold rose more than all major asset classes, and the current forecast continues to point towards multi-year growth.

Recognizing a strong opportunity to capitalize on the rising price and demand for gold, Black Mountain Gold USA Corp. (TSX-V: BMG) (OTCQB: BMGCF) entered into a joint venture with M3 Metals to acquire up to 90% of the Mohave Gold project in Arizona. Past exploration and development on the property indicate significant potential for an open pit, heap leach gold mining and production operation. Channel sampling is currently underway, which has yielded highly encouraging results so far. This will be followed by ground geophysics and an aggressive 5,000 meter drill program aimed at expanding the property’s historic resource.

A dream team operating in a mining-friendly jurisdiction

Formerly known as Huffington Capital Corp., BMG is a Vancouver-based gold explorer that combines three factors most critical to mining success – a solid team, great gold showings, and an ideal jurisdiction. Upon acquiring the Mohave Gold project in 2020, BMG assembled a dream team with a remarkable track record of building companies and creating successful exit strategies.

This track record includes positioning Millennial Lithium Corp. (TSXV: ML) as an advanced-stage lithium company and negotiating its acquisition in a $353 million all cash deal. Millennial started with a market cap of only $10 million, roughly the same as BMG’s current market cap, and the Board of Directors plans to grow BMG utilizing a similar strategy.

I recently chatted with Graham Harris, CEO & Director of BMG who shared some insights on the company’s vision and reasons for undertaking this latest gold venture. In our interview, he explained:
“In light of the massive Federal liquidity injection, we knew that gold was a good place to be, especially when considering price and demand. We were thrilled to find this asset in an ideal jurisdiction, on a property that has historically only been drilled to a depth of roughly 40 metres. Given the regional geology, we believe the deposit is stacked, and we’re looking forward to confirming this through an aggressive program that will fast track the project into production. We’re thinking big and see potential for a million plus ounces on this property.”

Mohave Gold is situated near the mining-friendly town of Kingman, Arizona, just 2.5 hours southeast of Los Vegas, Nevada. It’s directly north of the currently producing Moss Mine and the historic Oatman Gold District within the Walker Lake Gold Trend. Comprised of 160 claims stretching over 3,200 acres, the property is home to favourable geology for low-sulphidation epithermal precious metal mineralization hosted by Tertiary volcanic rocks, and is also surrounded by mineralization open along strike and at depth.

BMG will run a lean cost structure, supported by the fact that more than $12 million has been invested in the project by previous owners. Robust infrastructure is already in place on the property including two water wells, a heap leach pad, unlined ponds, and an onsite crushing circuit and conveyor system. The property is highly accessible through an all-weather road and is located within 20km of a high voltage power line.

Small scale mining and exploration activity was carried out on the Mohave Gold property from the late 1800s until 1995 which included the shallow drilling of over 600 holes in preparation for an open pit, heap leach operation that never went into production. Historic drilling and development typically focused on the northern half of the property, and significant potential remains on the southern half where gold-in-soil anomalies have not yet been tested.

Mohave Gold is ideally situated in a safe, mining-friendly jurisdiction within the Walker Lane Gold Trend alongside a number of other historic gold mines. 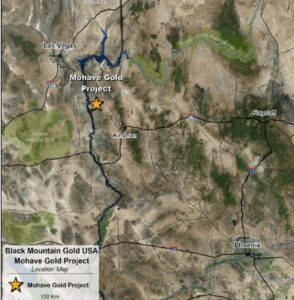 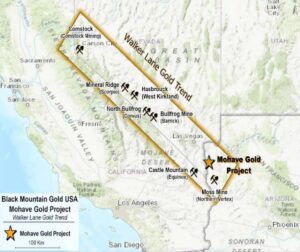 Widespread, surface gold mineralization was confirmed on the property during extensive rock chip sampling programs most recently completed by M3 Metals, the results of which included 78.1 g/t Au over 1.5m. Data gathered through these programs support a revised geological model focused on the stacking of mineralized zones which in turn, adds potential targets at depth.

Other findings included discrete, circular anomalies in the northern portion of the property that link to previously mapped areas of precious metal mineralization.

Prominent areas of northeast-trending faults which correlate with gold-bearing quartz-calcite veining were identified that warrant further geological mapping and sampling. Additional zones were also uncovered that have little to no exploration history.

In the southern portion of the property, survey data indicated that the area is dominated by north-south trending faults which intersect a northwest trending corridor. The data also suggested that quartz veining, identified through historic mining and sampling, correlates to the intersection of structures, presenting highly prospective targets for follow-up exploration.

Another interesting finding included a large potassium anomaly centred over several of the northern prospects and smaller anomalies in areas of limited exposure, indicating potential for buried exploration targets.

The Mohave Gold geological model indicates that mineralization is stacked which will be confirmed through an aggressive 5,000 metre drill program.

More recently, BMG carried out a mechanical rock channel sampling program that targeted several gold prospects across the northern half of the project, including Klondyke, Apex, Jim & Jerry, and Scout. The program was carried out to expand upon existing data and provide more reliable, in-depth results than could be achieved through rock chip sampling.

The program returned values up to 53.80 g/t Au and 94.2 g/t Ag over 2.8m. This indicates higher grade feeder zones to the epithermal system that warrant further exploration. Some of the wider intersections were equally as encouraging including a channel at the Scout prospect where sampling over 24.75m yielded 0.71 g/t Au, demonstrating strong potential for an open pit mining scenario.

A follow-up channel sampling program will kick off in Q3 2021, focusing on additional prospects in the north and various prospects throughout the southern portion of the project. All data generated by the sampling program will be incorporated into the project’s extensive geological model that will be used to strategically target holes for the upcoming 5,000 metre drill program.

Next year, BMG will focus on further drilling, metallurgy and geotechnical studies, completing a PEA and PFS, and advancing the project to the construction and development phase.

Lots of excitement in store for Black Mountain Gold! Stay tuned at blackmountaingoldusa.com